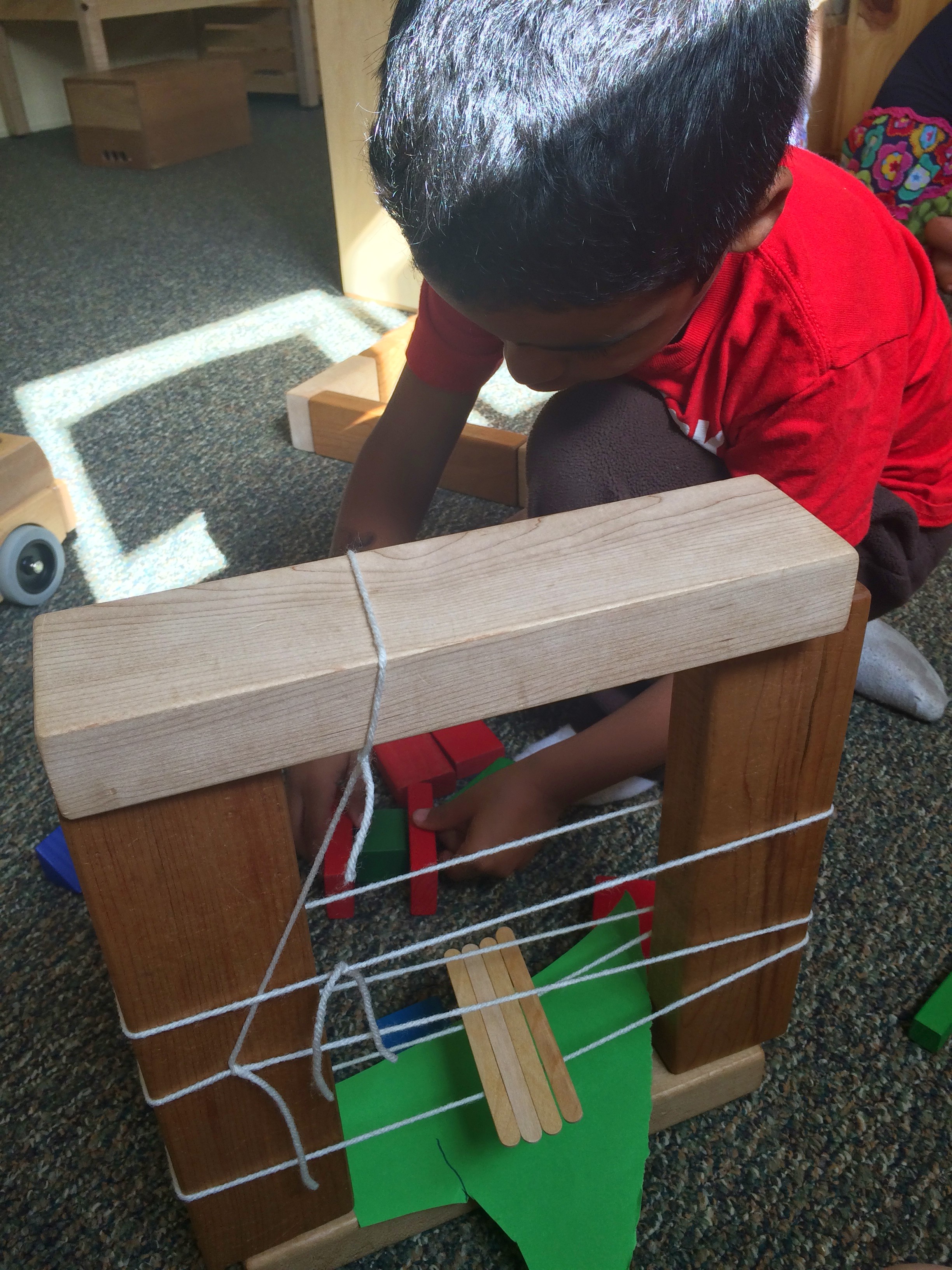 extending scenes from the game Angry Birds by building small block structures and knocking them down with the toss of another small block.  Eventually he decided to construct a catapult to launch items into his structures.  He had already spent some time playing around with the catapult idea when for about an hour on this day he used various materials and the support of a thinking partner (me :)) to try to get the catapult to work in the way he wanted.  First he tried a zig zag arrangement of yarn.  Then he hot glued popsicle sticks as a platform.    When this didn’t create much forward motion, he backtracked and tried just one piece of yarn and 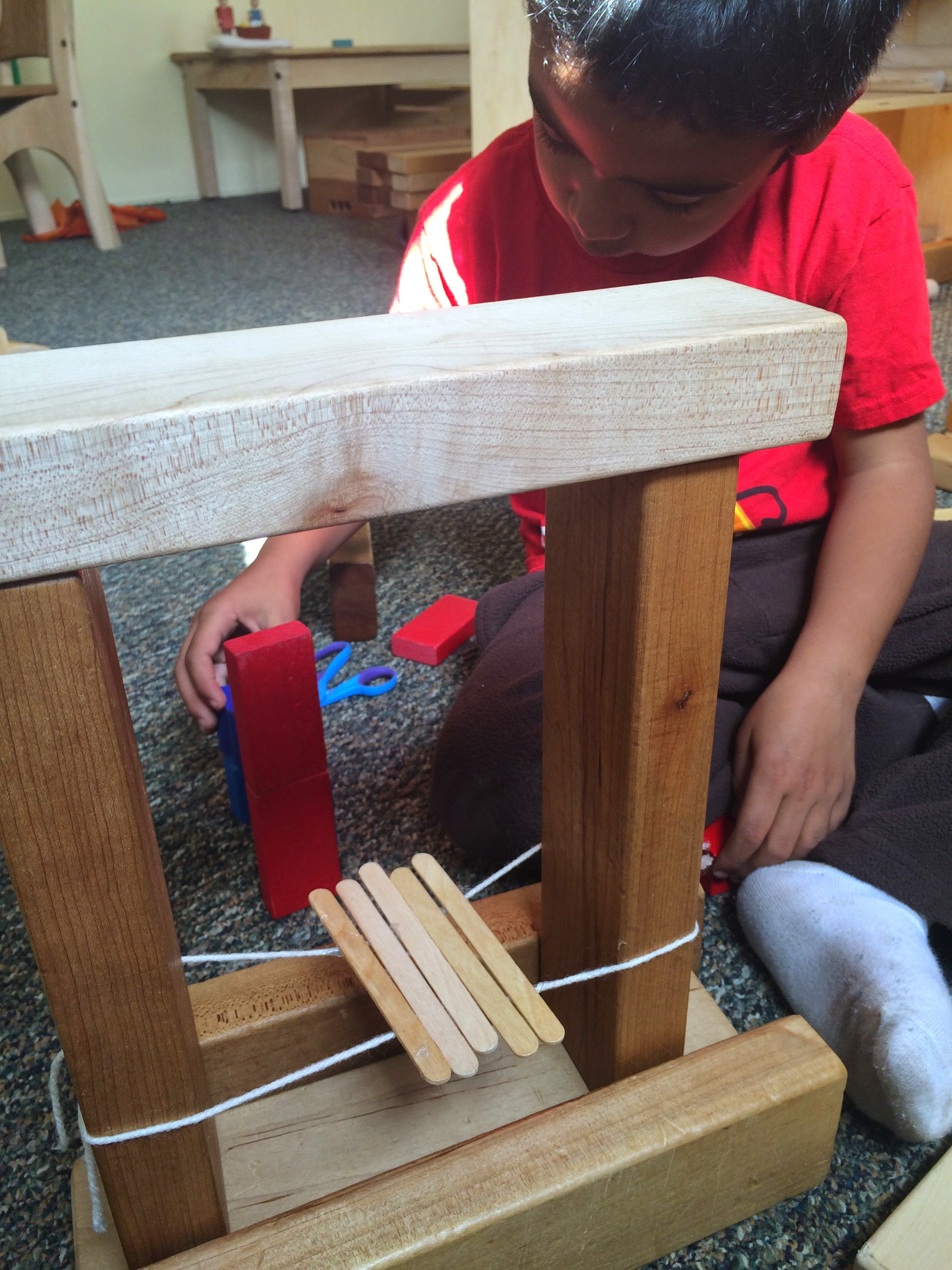 added support blocks to keep the catapult stable.  As he worked, Izaiah and I talked about the materials he was using.  We talked about how the yarn seemed tight, but then would loosen and become slack.  Izaiah decided he needed something stretchy.  I offered the idea of elastic and fished a piece out of the sewing basket.  This worked a bit better and the block did get some launch movement.  Another child came by and offered that we needed something like a rail to keep the block on the platform during launch.  So we tried to attach pipe cleaners to get this effect.  With each small adjustment Izaiah tried launching a block.  Usually with little forward movement, but with a lot of joy 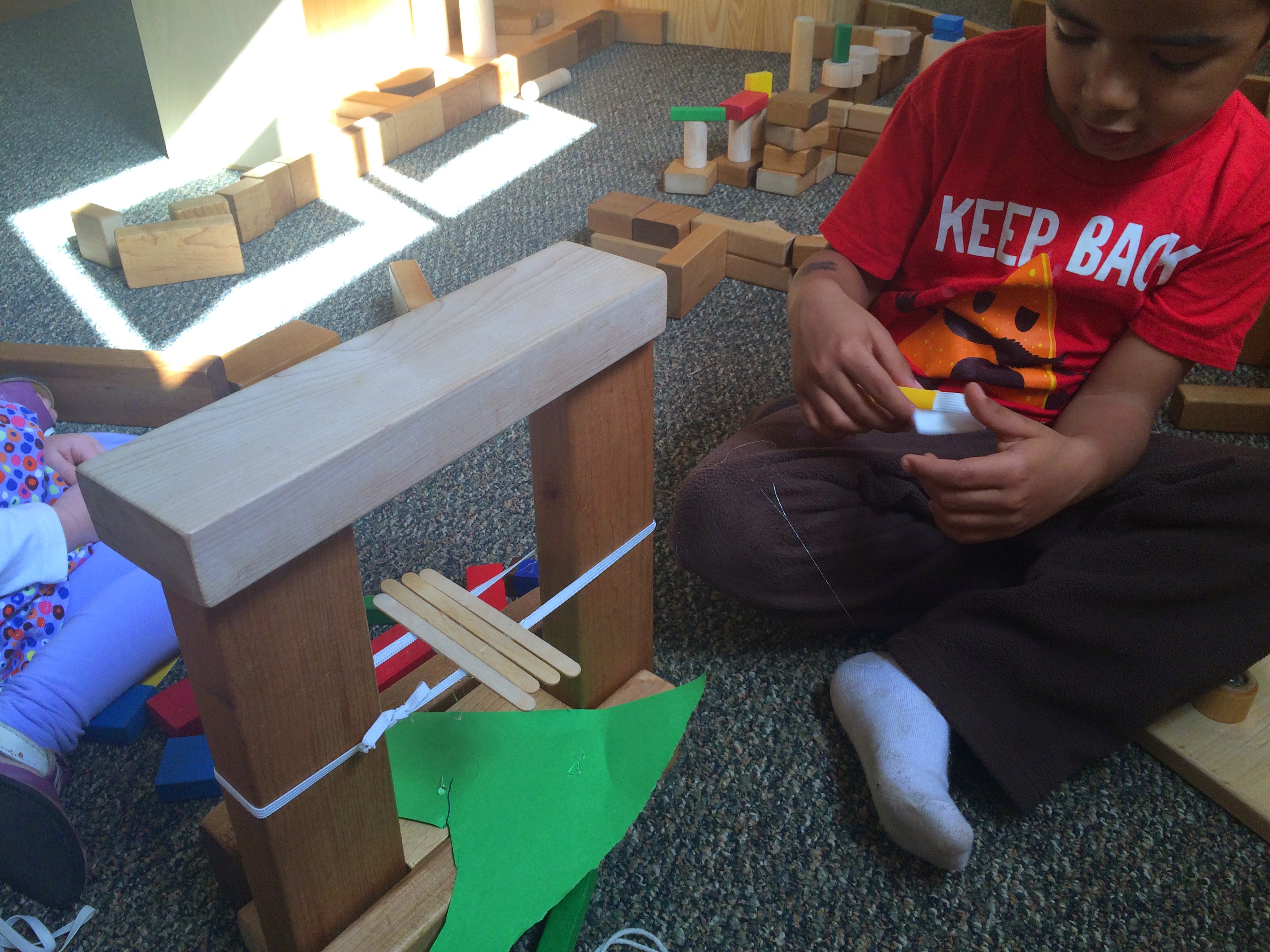 in building a structure to knock down, making noises to launch the block and storytelling about what was happening with the pieces. We got some okay launches in by the end, not perfect launches, before Izaiah decided to turn his attention elsewhere.

This story of Izaiah and I working with the catapult is a story of tinkering.  We tried a lot of different things, we didn’t adhere to a set of directions, we did try out advice offered, we worked with various materials and tools, scrapped ideas, started over, enjoyed the process, added details and talked to each other in both technical (“This side is too wonky… it needs to be stable.”) and fantastical (“Kerzoom!!  I’m the launcher, you’re the bird!”) terms about the story of the catapult we were creating.  We were tinkering with making a catapult.   And tinkering is one of the big ideas of…. dun dun dun…. the Maker Movement.

“Tinkering is not a field like chemistry or physics, yet it is worthy of study, particularly by those who want to engage kids as makers today.  Tinkering is to making as running is to sports, as tapping your foot is to music.  Tinkering is a process.  It is an attitude.  It is the means to fix, make, change, modify, and customize the world.”(Doughtery, 2013 in Gabrielson)

Tinkering is one of those words that hits the sweet spot for describing what the maker movement is all about.  The maker movement is and isn’t about creating a product.  In fact it’s that rather squishy and happy place in the midst of both process and product that tinkering describes so well.  The place where a sharable product is a goal but not the end goal, the place where the process rules and yet doesn’t become naval gazing (so entangled in reflective and meta processing that you never get to the sharing.

And in fact, this idea of tinkering and being in the midst of process and product is totally aligned with what play is like for young (and old) people.  As children play they change the rules all the time, tinkering with reality, they intermingle process (“Now I’m the sister, okay?”) with product (“Hello, my dear.  Would you like to go to the park?”) in a way that requires no pause or definition between the two.  This being in the moment, in the middle of, is what tinkering is all about.  And I guess this is why I feel so at home in Make.

Funnily enough when I first heard about the Maker Movement through my work with the Connected Learning community,  I was momentarily irritated.  After all, I am a deeply rooted play-based early childhood teacher, having spent the last decade (at the time) advocating for play in the primary grades.  I was a little hot to see that suddenly play seemed like a good idea when adults and older students are doing it!   Pretty soon I was excited to see how play was being made visible and uplifted by Make.   I got to know what was happening in the world of Make and saw the way this movement could bring together the early childhood play-based cause in collectivity with other important interests, like informal learning and open-sourcing.

Ultimately it felt juicily right up my alley.  The maker movement is about thinking of yourself as a maker rather than a consumer; make is a culture and a communal mindset that encourages creativity, failure, products, mentors, innovation and tinkering.   So this year as I have had the opportunity at Roots to partner with Discovery Place educator, Carla, we have intentionally brought our own interests in make.  We have also tuned our senses towards noticing the way the kids acted as makers of their own accord.  What follows is a photo curation of some experiences in make from this year so far.