This week a visitor came by Roots for a short while at maybe eleven o’clock ish.  As we chatted happily about the school, she asked me, “Are there lessons?”  I figure what was meant is: do we all sit down at once to do the same thing at the same time— not so much.  We do get together as a group mostly for the purpose of building community connection.

But are there lessons?   Oh yes!  Here are a few that popped into my head from just this one morning.

On this Friday morning a child arrived to school and shared about the trip his family was taking to Atlanta, Georgia right after school.  His mom spent a few moments with him looking at the U.S. map we have on the wall and talking about the journey.  Later I noticed this child looking at the map again and saw another child join.  They  talked about several places of interest and their connections to them.  They asked each other questions and pointed to the map. 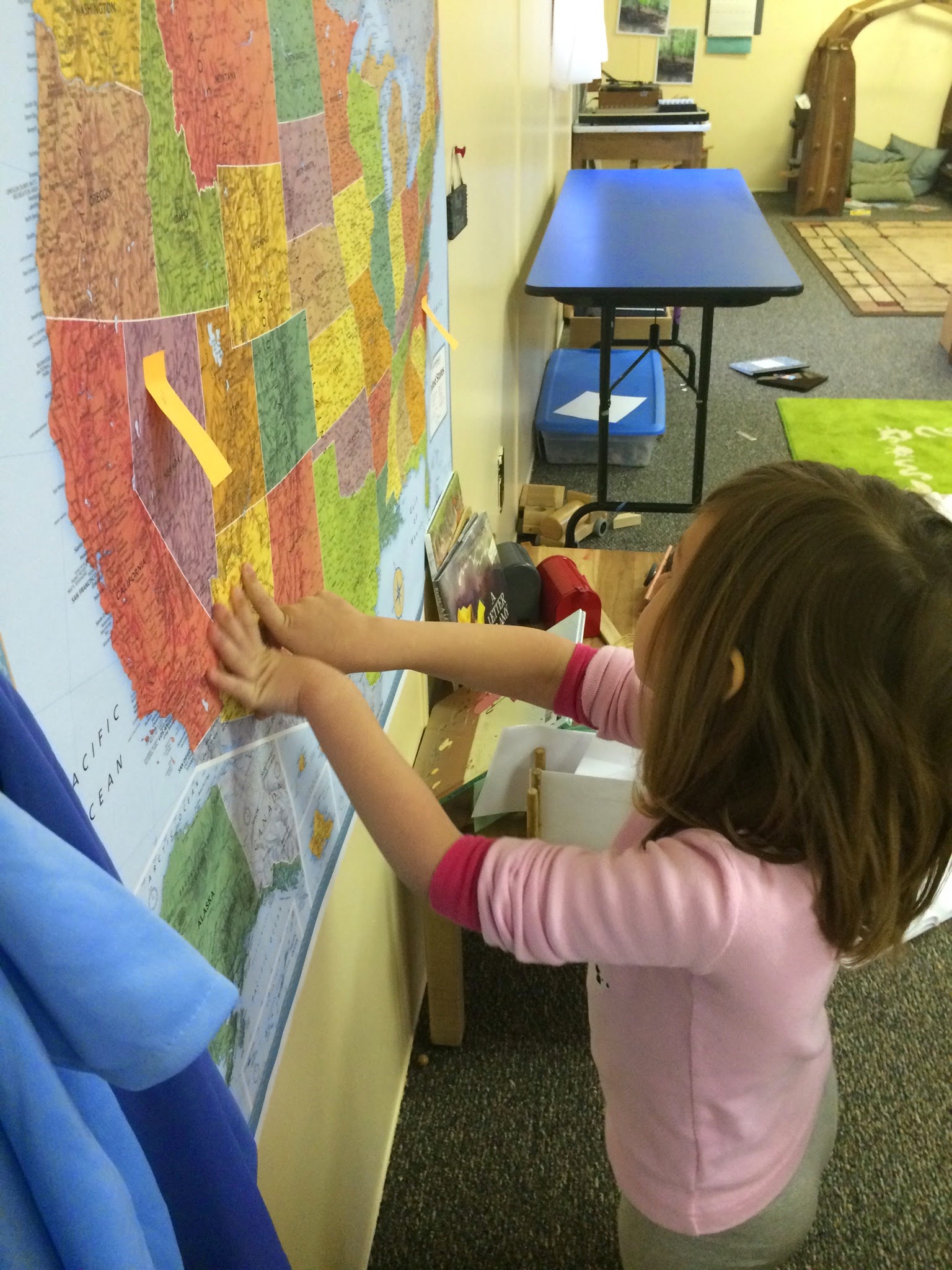 Also on this Friday a talented mom joined us for the day and brought extra crochet hooks of various sizes and styles and some lovely chunky yarn.  She was quickly joined by four kids who worked for a bit with their hands and talked about their past experiences with similar handwork.   There were opportunities to watch a model and try out a technique for ourselves, to hear new language around this craft and to manipulate small objects in intentional ways.  This mom spent as much time accessing what the group already knew as she did showing them “how to.” 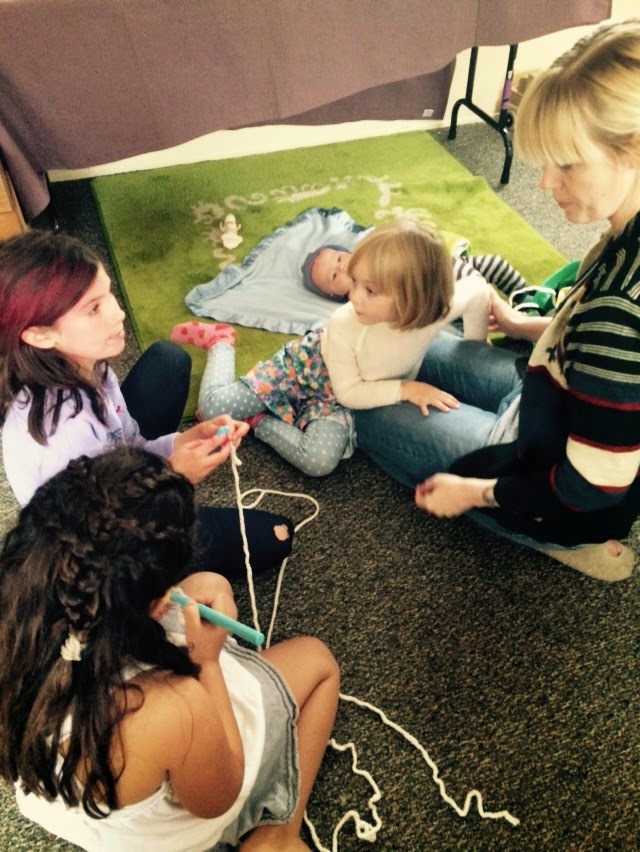 It was a rainy day and chilly, so kids were spending less time outside and as I noticed a few kids trying to figure out where to engage, I remembered their interest in drawing on white boards earlier in the week and invited them to join me with this again.  A few kids took me up on this.  After a while all but one drifted away as did I.  When I returned my attention the child remaining had hacked the small white boards for his own purpose of creating ramps.   He added the nearby wooden trucks and a box to prop up the end.  I was drawn away elsewhere again, but in a few minutes he asked me to return to see his creation.  I sat nearby for a few minutes watching him build, play and rebuild.  The ramps would fail sometimes, so he would try a different way or he would come up with a new idea he wanted to play with, like making a ramp going up so that the truck would “jump.”   He tried different angles and different supports with the purpose of continuing his play. 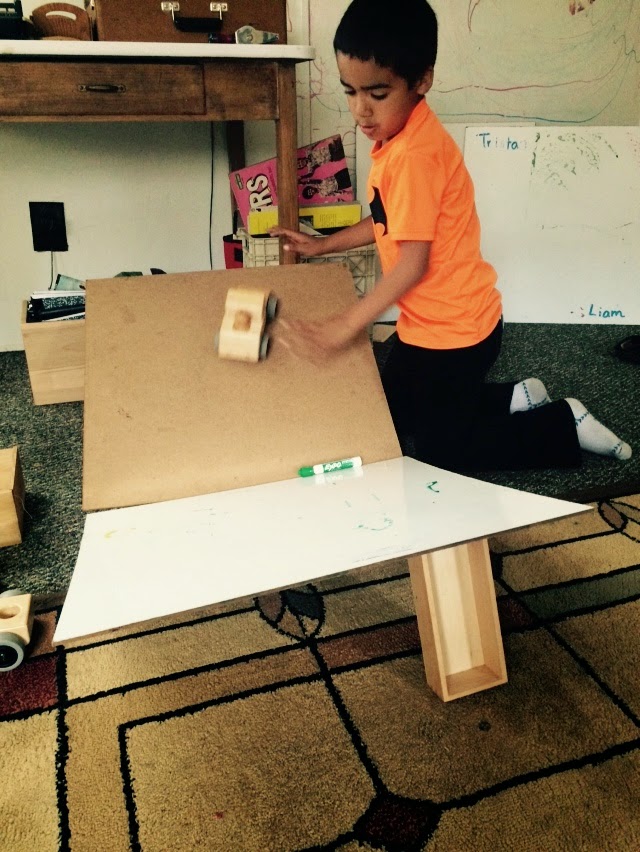 So that’s three small events before 11 am, and I am noticing some key features.

Here’s to reclaiming and renaming and undoing the traditional lesson!

PETER PAN:
Are you ready for today’s lesson?

Yesterday my family saw a great production of the musical  Peter Pan put on by Northwest School of the Arts.  As I watched my kiddo see it staged for the time my thoughts became a bit philosophical .  As I listened closely to the lyrics of Never Grow Up and watched the story  of Never Land, unfold I thought a lot about our school, about what it means to be a kid and to grow up.  In some ways we are creating a Never Land at Roots, where play and fantasy rule, where children are honored and we create our own wonder with nature’s abundance. In a world where these things are traded in (particularly at school) for adult directed living by age 5, this is precious space.

But I think that at schools like ours we are doing something more than Never Land managed.  Remember at the end of Peter Pan Wendy is all grown up.  She won’t or can’t fly anymore, not even for a short trip off for “spring cleaning”.  The best she can do is prepare and allow her daughter, Jane, to fly off temporarily (“just for spring cleaning” says Jane) with Peter as the final curtain closes.  But Wendy herself?  Man, did she depress me!  Dour and heavy footed, so much so that Peter Pan dissolves into the same tears he started with at the beginning when his shadow was lost.

What I think we are working at everyday at Mosaic is not just a space for children to thrive but a place and community where adults are thriving, too.  And the children see that and can participate with adults as they engage in things they love like music, gardening or play. 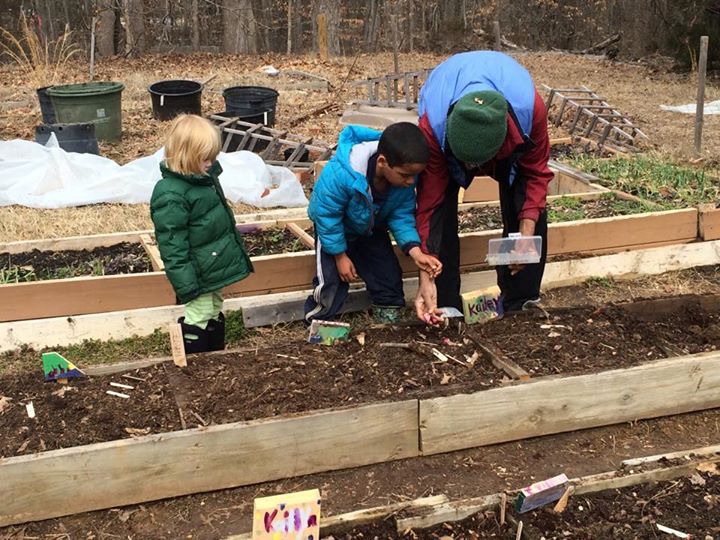 As I was ruminating on all this Zach Slayback’s blog post, Let’s Abolish Childhood, popped up in my feed.  He is saying a whole lot of what Peter Pan says and more.  He questions the artificial social divide between children and adults that empowers one group and makes the other submissive.  He notes that much of our conceptions of childhood comes from the “childhood-as-studentdom” trope while our conception of adulthood is connected to the “adulthood-as-crisis” one.   Here’s a quote that is at the center of my read of Zac’s idea:

We don’t have to just accept this lot as the one which the universe gives us…. This requires us to do away with the artificial division of life into childhood and adulthood. Children are simply persons growing into adults, and adults are simply persons who have grown past a certain point of biological development. They do not wield inherent authority over children that is not given to them in virtue of some other role (i.e., parent). Similarly, children are not something odd to be looked down upon and sequestered off. As soon as they exhibit an ability for sound judgement, they ought to be the primary decision-makers for those things in their lives over which they can exert agency.  They ought to lead their own learning and exploration, and only pull on adults when necessary for further instruction or for last-resort enforcement reasons in the rare case that children are naturally disagreeable.

Yes!  I am all for ridding ourselves of binary divisions and hierarchal dualisms like adult/child.  I believe strongly in treating children with respect as fellow humans.  I am very interested in disrupting the dominant paradigm model of authority over children.  Kiddos making decisions is at the core of the work I do everyday at Roots.

And! Remember why Peter Pan took Wendy to Never Land to start with?  And why the lost boys all came back to live with the Darlings at the end of Act II?  They wanted a mother and a family.  They wanted support and love.  (Okay, it is very dominant paradigm  that the Lost Boys had to agree to be quiet and do as they are told to get that, but stay with me.)  There is possible a new kind of relationship between adults and children that is supportive, active, respectful, empathetic and yes two-way, but not really the same on each side.  I think adults can be with kids in ways other than Zach’s named tasks of “when necessary for further instruction or for last- resort enforcement.”   I think this rather still secludes childhood from adulthood actually. 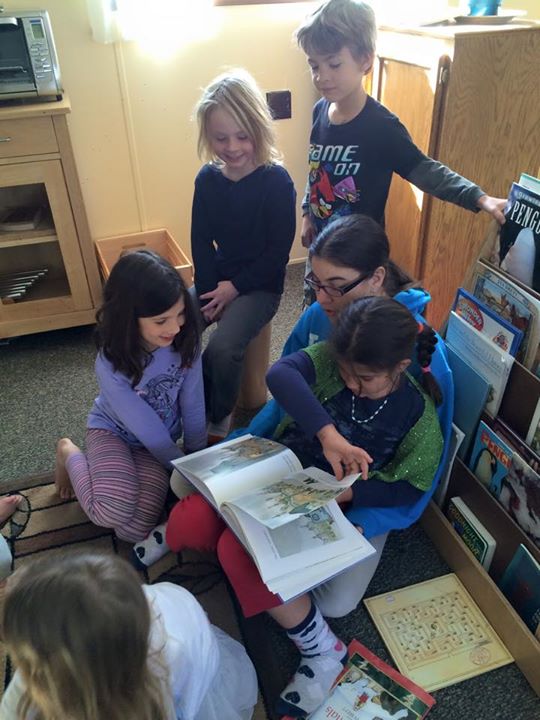 I am good with my role as a person who has spent more years on this earth (in this life 🙂 than children.  I am good with the experiences this time has offered me and what I have learned and how I can share my excitement about these things with kids, including what I have learned about living with other people, empathy and finding rhythm in life.  I like being able to share those things with kids in authentic ways 🙂  Happily for me I have found this community of people through which I am seeing my adulthood as  something other than tie-wearing, serious expression, worried-air crisis of adulthood.  I see it as a valuable.

I am also good with the role children have as people who have spent less time on the earth (this time around, of course ;).  I value and learn from their connectedness, authenticity and fresh-eyes.  Adults and children don’t have to be just the same for us to value both and create active, respectful, loving relationships among us.    I am with Zach and Peter, that we need more shift- less student-dom and less crisis, more lands for play and whimsy!    And it’s not just about giving kids the reigns, it’s about actually LIVING together in families and communities, which requires a lot of love, support and empathy all around.