When my child, Luke, was almost six years old there was a period of less than two weeks when he learned to pump himself on the swing, ride his bike without training wheels and climb to a previously unattainable branch of a favorite tree. Many parents have noticed this kind learning and growth explosion in our kiddos, when things just seem to click and come together all of a sudden.

I have enjoyed seeing this kind of learning explosion happen with many children over the years in terms of literacy learning, too.  Sure, kids can and often do learn various skills and pieces of knowledge over time, but there are also these wonderful moments or bursts when all of a sudden things just come together and the child begins to jive with a different kind of literacy, maybe sounding out words on her own in writing, maybe blending sounds together to decode text, or suddenly picking up a ton of “sight words.”   When this happens I see kids gobble up lots of skills and knowledge bits so quickly and easily in a burst of “getting it” in a new way.

It’s really exciting to be part of, but more than that it points out something interesting about the way learning happens. Learning doesn’t have to be a painful accumulation of skills and facts over time, on a timetable or timed for speed. Without some of the structures that force this obsession with time, I have noticed that people, yep that includes kids, can learn a lot in a short period of time, making big ole jumps in what we have traditionally called development, with great joy and ease.

So as adults one thing we can do is be patient and observant, but what else? And for that matter what are kids doing in the meantime, if they are not drudging through workbooks or direct instruction? One possibility is that kids are building up habits of mind or playing with taking on various identities. To me these do happen more over time, slow cooked into our bones, and they aren’t things you can sit down and learn in a lesson or be tested on at all.   How do kids come to think of themselves as readers, writers or scientists (not that these academic-y identities are the only ones kids come to know!)? It’s complicated for sure, but part of it is by being surrounded with models and then having lots of space and time to play with the possibilities.

So here are a few examples of what I mean from this week at Roots. I posted to Facebook earlier this week the little anecdote below about a seven year old who named herself in a pretend play scene as “the girl who loves science.” This is much more than cute to me. This is one of the really valuable things that is happening as children play: they get to name and rename themselves as the play changes.   It’s powerful to name yourself in this way and to know that you can name yourself again and again in lots of different ways! What if kids knew that it is really themselves who get to say who they are. In terms of reading, that their own ideas are more valid than what a grade, test or level system might say about them. In creating and recreating their dramatic play worlds, they come to know their own power to revise themselves and their world. 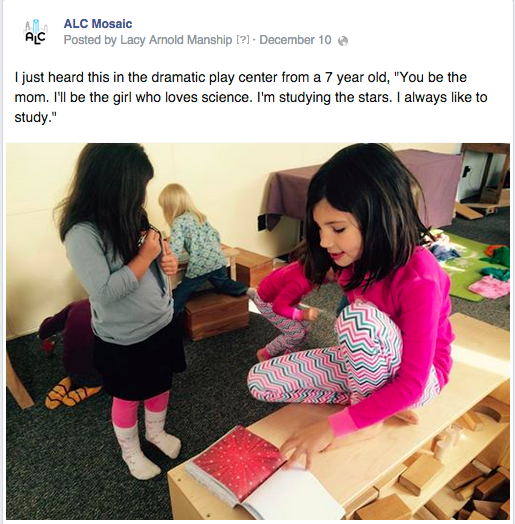 In two other moments this week I saw this kind of habit of mind around reading. On Friday at ImaginOn Children’s Library, we spent about thirty minutes hanging out in a play area with toys surrounded by shelves of books and comfy chairs. Two children decided to spend their time playing at reading chapter books. They each selected ones they wanted from a shelf and sat down to read. They occasionally would turn and chat with each other about what their books were about. In some settings these books would be seen as “above their reading level” and what they were doing wouldn’t be called reading at all.  I don’t care one iota myself about reading levels or classic notions of what it means to read (seeing reading as only the ability to decode). I am much more curious about the story of literacy the two kids created. This story included several things that are very important to me as a literacy researcher. In their play world I gathered that self-selection of books, talking about books and feeling inspired by the environment were all important parts of what it means to read. Well, you would think they had been schooled by Harvey Daniels or one of the other great reading teacher gurus! These are exactly the ideas about literacy that progressive literacy educators have been trying to get into literacy instruction for years. I guess we have a lot to learn from the play of young children, huh?! 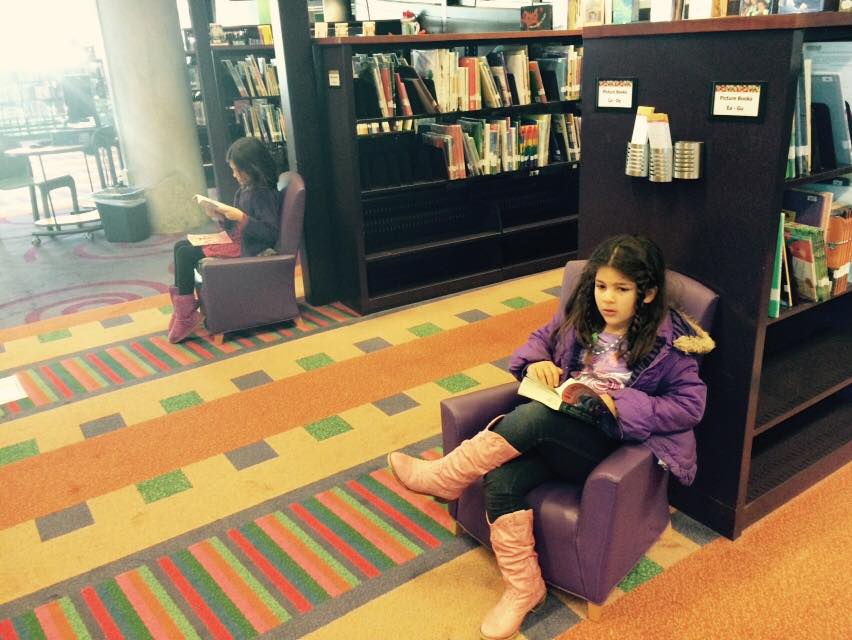 On another afternoon this week as kids were deep in fantasy play I saw someone borrow one of my books for teachers and families. I looked up and saw that actually almost everyone had one of these thick books in hand. I heard a six year old say to another child, “oh, I just love to read all day!” To me the value of this kind of moment is again much more than cute. It is totally equal in my mind with kids sitting for 30 minutes of phonics instruction on diagraphs. I know that these kiddos will have multiple bursts of literacy learning in their lives in which they eat up lots of bits of knowledge and skills. And I think part of coming to these moments of learning explosion is connected to the slower more complicated journey toward knowing oneself as a reader.   The play’s the thing that does that, baby! So what can we , adults, do?  Let the children play. 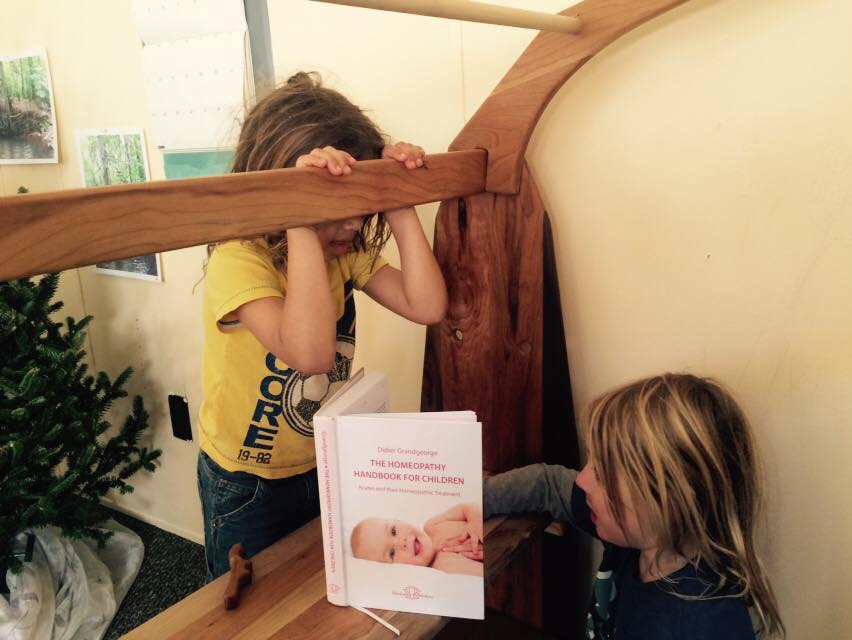 Last year I came to school one day to see a giant marble maze created with blocks by two older boys.  It made the most pleasant sound as the marble got to the bottom: clinkity, clink, clink!  There are these kinds of pivotal learning moments that stick in the minds of the kids even this year.   The other day I heard a younger student, who started this fall and hasn’t met the older kiddos very often, referencing “the day Tino made the awesome  marble maze.” 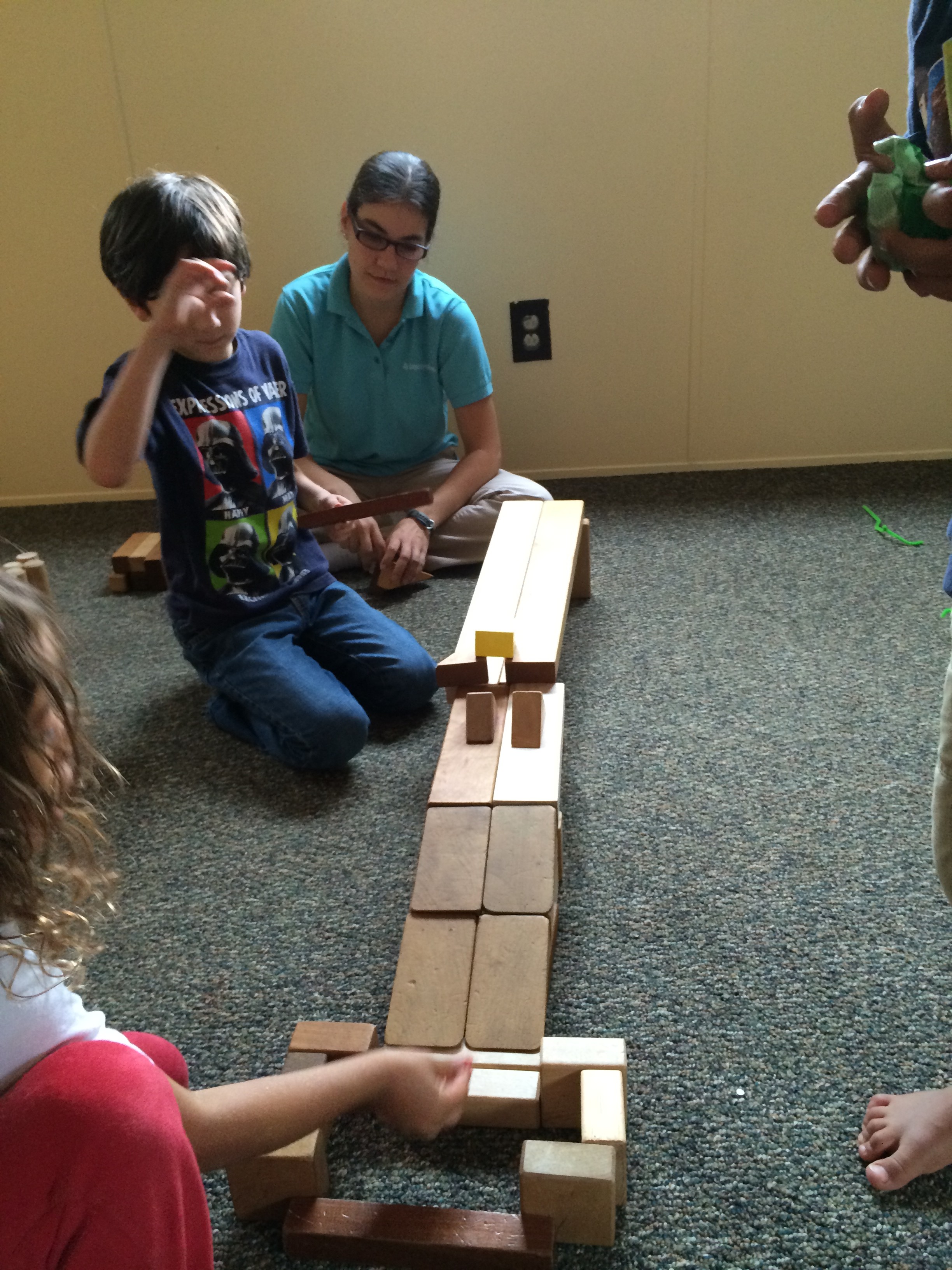 Marble mazes have become part of the culture of our group.  This year the oldest kiddo in our crew began making marble mazes early in the school year.  With lots of time trying this out at the block center another kiddo latched into this idea quickly.  For at least two months there were marble mazes built every day.  They were built inside with unit blocks, with miniature unit blocks inside and and outside and outside with hollow blocks. 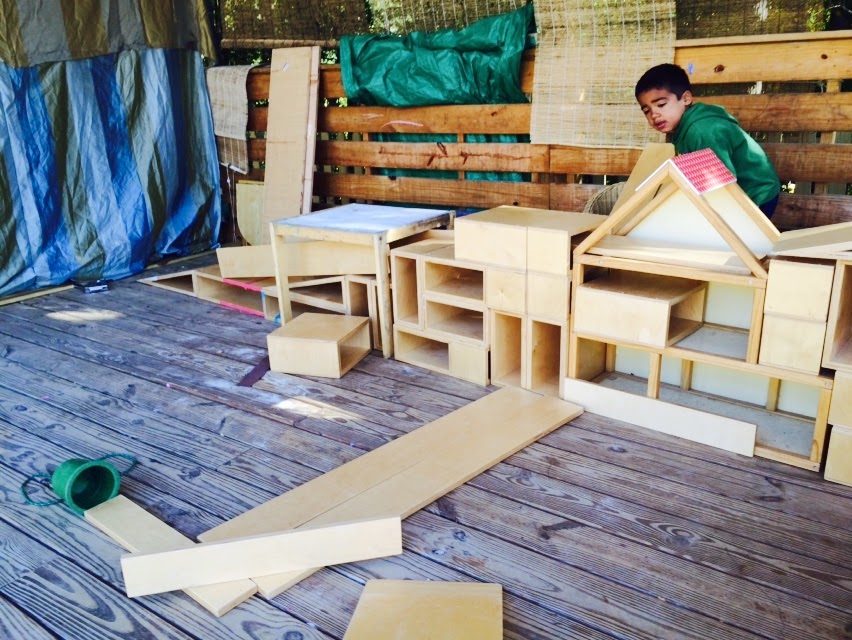 Following this interest Carla, our Discovery Place partner, and I brought in more materials that might extend the interest.  We made marble paintings, tried a premade marble maze kit, made our own felt balls and used cardboard and straws to create labyrinth style marble mazes. 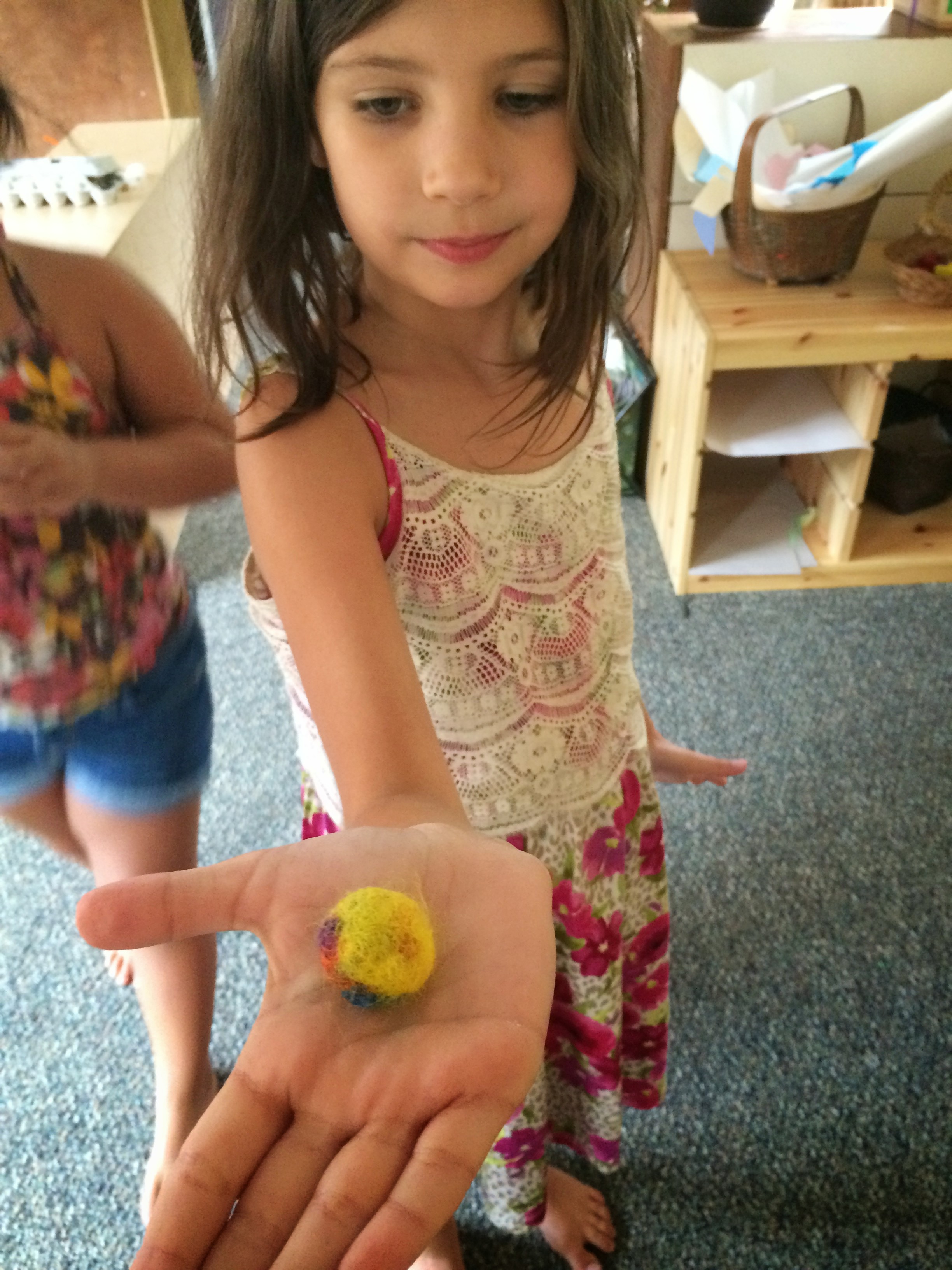 It’s been exciting to see all that has happened just around this one concept.  It really has become a collaborative extended inquiry.  Here are some of the things I noticed along the way! 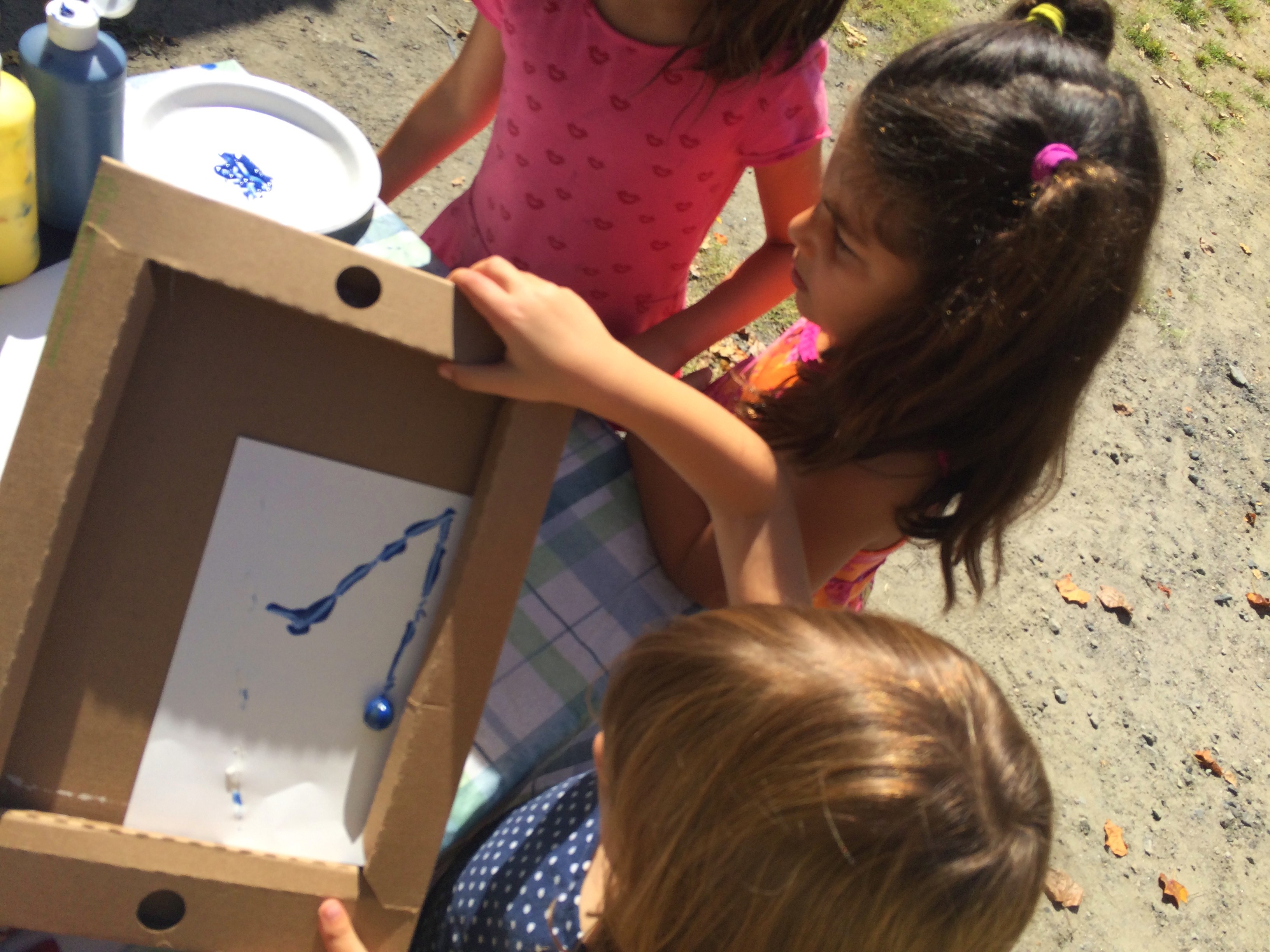 Lots of physics is involved in block play and building generally.  As kids manipulated blocks, cardboard or pre-made pieces they had to think about how the materials worked together, what would create sturdy pathways and walls.  They decided which kinds of blocks or other materials would work for specific purposes.  As they played more and more with the marbles, they developed understandings of force, movement, and incline.  They tried different kinds of balls, too: felt balls, beads and wooden balls.  They had discussions about the weight of the balls, the size and the smoothness of the surfaces and how this changed the way the mazes worked.  They explored symmetry as they created two sides of the maze or two tracks side by side.  They explored length and measurement as they tried to see and describe to others how far certain inclines would allow balls to roll and as they found ways to articulate to each other how long a certain part of the maze or even a certain block needed to be (i.e. “Hand me the long one.  No, the one that is like two of these.”) 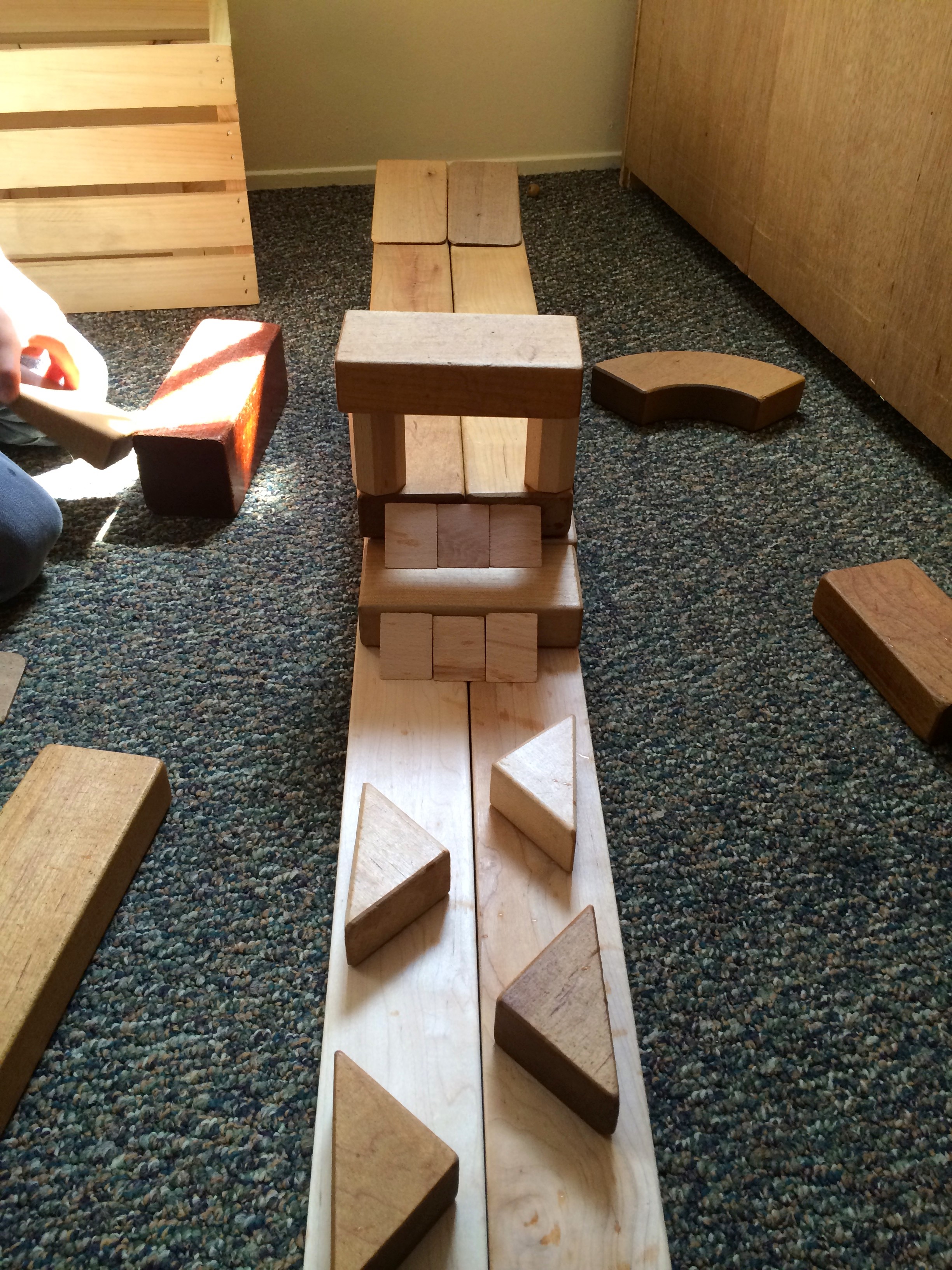 And there were overarching learning ideas in constant play, too, particularly this inquiry made space for iteration, revision and mentoring from one another.  They revised the mazes in the moment as they went.  Usually a child would begin building and at some point would stop to try rolling the marble to see how things were going.  Then back to building to make changes.  Eventually they would declare the maze as ready or done and often get someone to come over to see how the marble rolled.  Sometimes this sharing process would lead to more changes.  Sometimes something unexpected happened during the share and kids went back to the drawing board.  Sometimes another child coming to see would have an idea for improvement or just something different and they would try this out together.  Very often multiple kids worked in the area on various mazes.  They watch what others are doing and try the ideas out themselves. 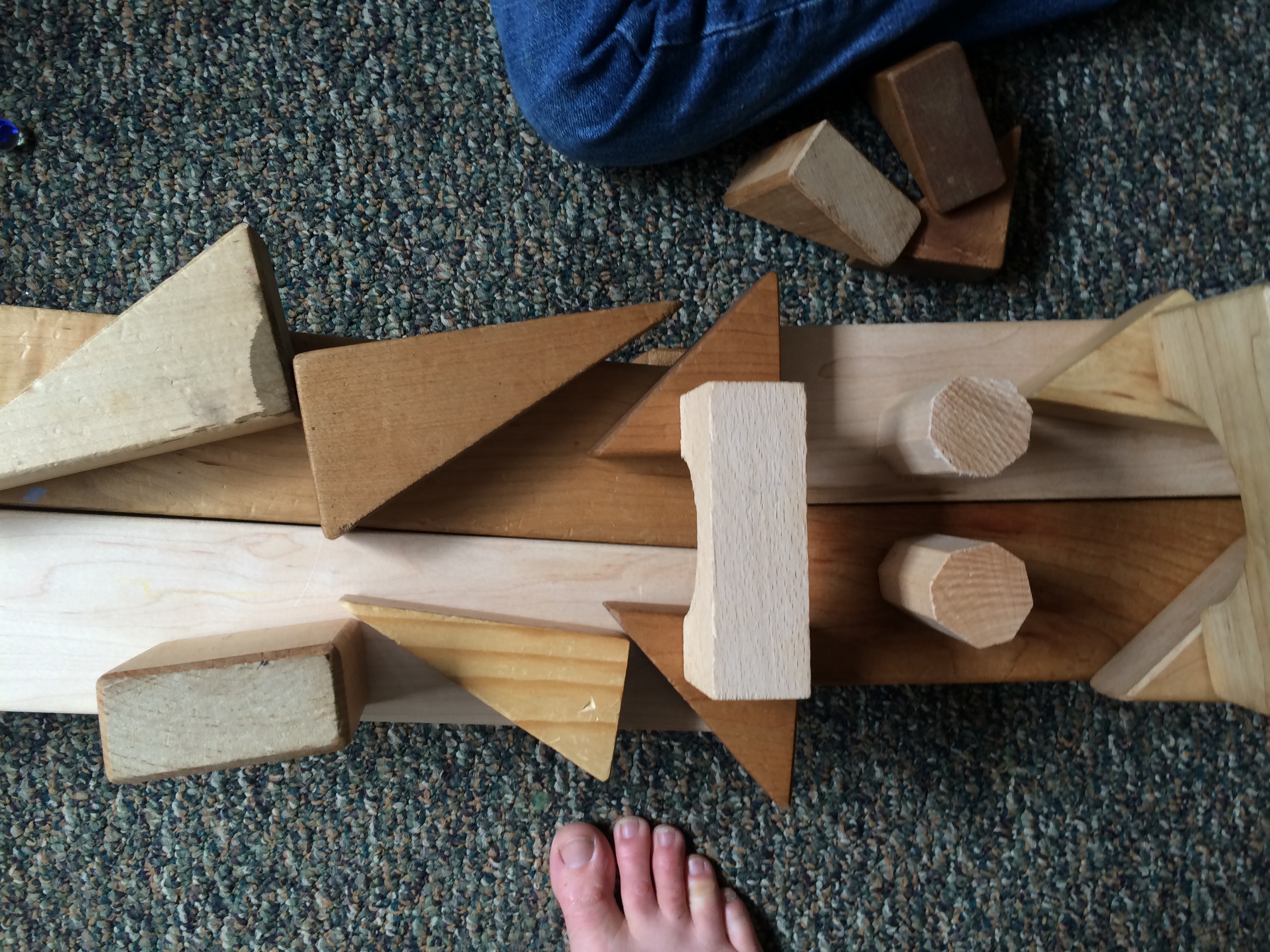 They also hold the old mazes they have seen in memory and try them again next time.  I guess this is the thing about the extended inquiry.  This interest continued over months.  So the kids were iterating all the time, trying the ideas again and agin.  They were able to build on their own attemps, on what they saw other kids do and even on the lore of last year 🙂 Overtime I saw marble mazes change from a long flat structure to ones with multiple pathways, two side by side tracks, high rise mazes, large scale mazes, mazes with obstacles.  Something like adding obstacles spread through the group, until this idea was common knowledge. 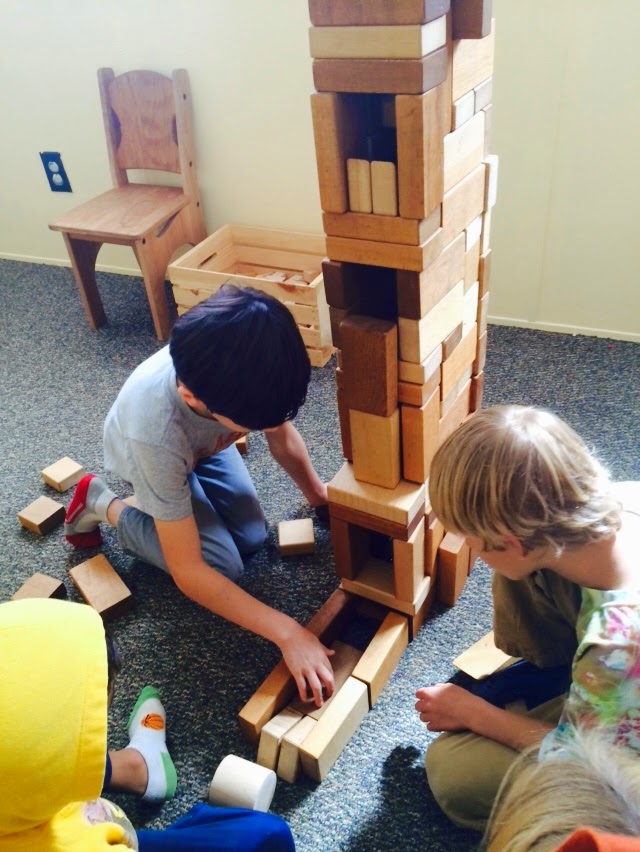 Ideas from the marble maze inquiry spread wings in new spin off projects, too.  The kids started making obstacle courses with large hollow blocks, chairs and boxes.  Carla and the kids even made a rat maze for the Discovery Place rat, Patsy (now renamed by the kids as “Petsy”). They used blocks to build a maze with multiple paths and areas for Patsy to find carrots. 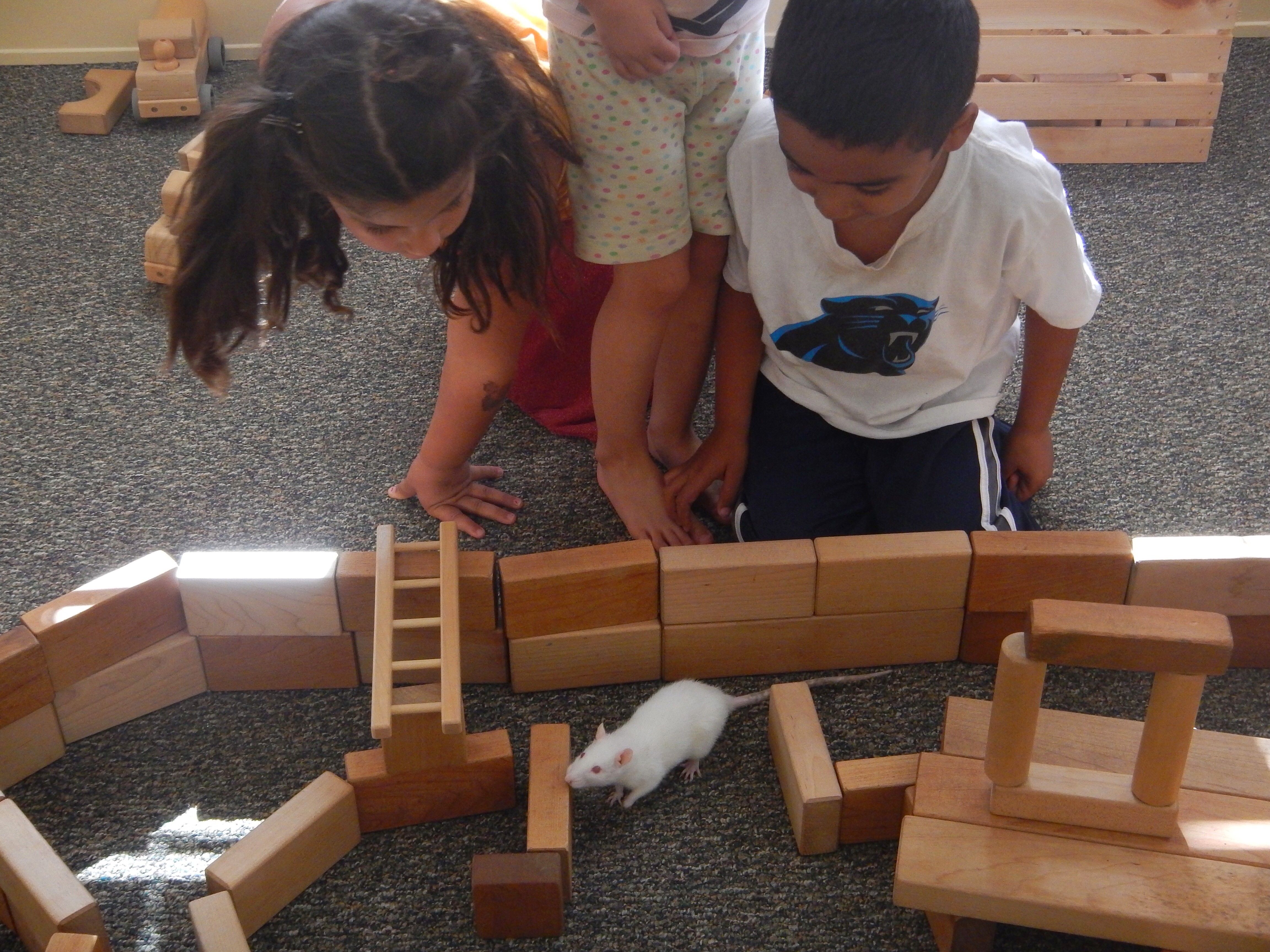 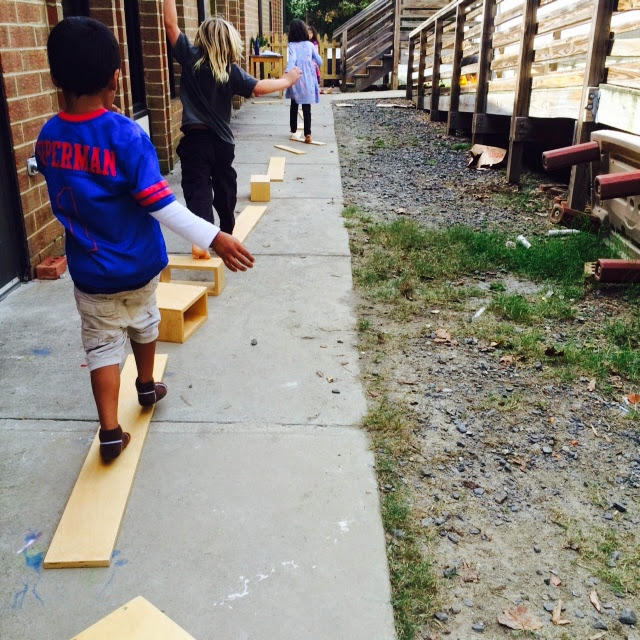 The social goes hand in hand with all of this (of course!!!).  I saw how marble mazes worked to build relationships between children and among the whole group.  As the marble maze inquiry continued and was shared, every child was involved at some point andso the inquiry became a point of cultural connection that was important in our transformation into a gelled community from opening of school into the fall.  The reason the interest became an extended inquiry is because the kids felt connected to the ideas and the other people playing around with it.   It’s always back to the social-emotional 🙂 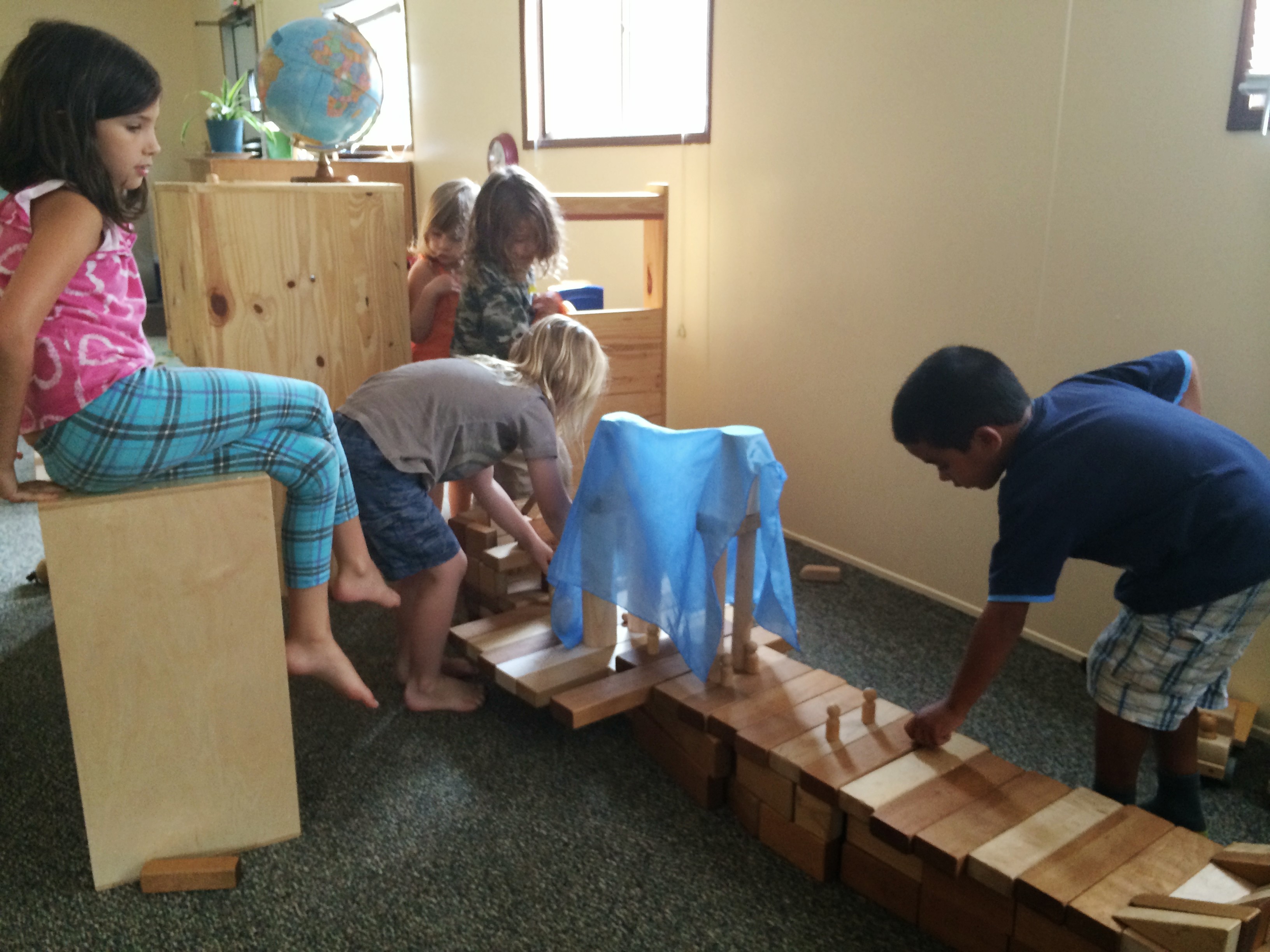